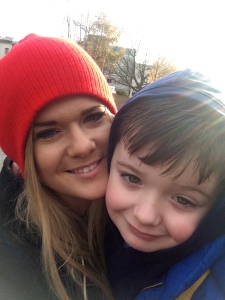 I feel as if he has let me in on a secret world, like he opened the door to a whole other realm that no one else has ever before seen. As if he had said, ‘look, I don’t do this for anyone, but seeing as you’ve been hanging around me for so long, you may as well come in. Don’t move or touch anything though. You know how I hate change.’

Our story begins in 2011, when I had the privilege of meeting a little boy named Sonny. I had just graduated from University where I studied Psychology and had got my first job as a 1:1 behavioural assistant in a special needs school in North London.

Sonny had been to pre-school before I met him, but only on a part-time basis, as they could not cope with his challenging behaviour. Sonny had been diagnosed with autism and ADHD.

He came to the school in nappies, he was often violent, and refused to sit on a chair for longer than twenty seconds. He would sprint off at any given time for no apparent reason, drop to the floor when he didn’t get his way and could not communicate through words or signs. He didn’t understand what others said, and didn’t answer to his name. He was frustrated, angry and very withdrawn.

Those first few months together were tough to say the least, as we were both finding our feet in a new school, but we formed a close bond quite quickly.

At school we learned about trees and trains and houses and animals and those weird symbols called numbers and letters. We painted pictures in art, we made cakes in cooking. He would eat the paint, (and mud and sand) but outright refused to so much as lick a piece of fruit. He confused me with his love of looking at  pineapples.  We spent a lot of time lying underneath tables. He cried when the class timetable was wrong. He laughed at me when I sneezed. He took his shoes off, I put them back on. We lined up toy cars. We played hours of chase in the playground. We laughed a lot.

I left the school in July 2013, but the thought of not seeing Sonny again was absolutely unbearable. After writing a letter to his parents, asking to stay in contact, we arranged I would see him over the school holidays, and every Sunday in term time. Me=Chuffed.

These days Sonny is out of nappies (we toilet trained him within weeks of him joining the school.) His signing is getting better and better, and in the last 6 months he has been talking! He says ‘help me please,’ ‘more please,’ ‘go home,’ among other words and phrases. He points to things he likes to show me, he tells me to ‘shh’ when he doesn’t like my singing, he makes more eye contact, and listens to, and understands simple commands like ‘pick it up’ or ‘put your coat on.’ The more time I spend with Sonny, the less I see the autism, and the more I see the person that is underneath his disability. Every day he shocks me with something new that he has learnt.

I will be sharing stories, photos and videos of what we get up to on our Sundays together. Sometimes we go swimming for 2 or 3 hours at a time. Sometimes we visit London’s best museums. Sometimes we learn about animals at London’s City Farms. And sometimes, we spend half an hour going up and down the escalators at Camden Town station.

I have taught Sonny many things: to have ‘kind hands’ with his friends, to say ‘please’ and ‘thank you’, to recognise numbers and colours and words. But he has taught me the much bigger lessons: patience, kindness and unrelenting love.

Working with Sonny has inspired me to run the Virgin London Marathon in April 2014 for the National Autistic Society. The charity does fantastic work with those who have autism, and their families and carers. If you would like to support the work they do, click here to see my JustGiving page and to donate. I would be so grateful for your support, for a cause that is so close to my heart.

9 thoughts on “Our Story”