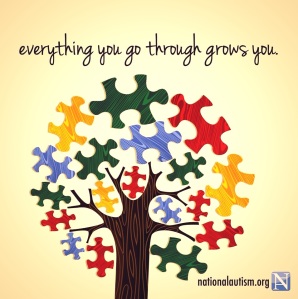 Much to Sonny’s annoyance, I rarely underestimate his abilities.

I talk to him a lot about pretty much everything…some things he picks up (he can now cross a road and say, ‘rech ma says stoch and gree ma says GO.’

And other things I chat about probably go over his head.

I make him talk and sign as much as I can and I never do anything that he can do for himself. I feel very strongly about it because I think if I underestimated Sonny, and didn’t talk to him because he ‘wouldn’t understand’ or I never prompted him to sign or speak, then not only would I not know what he is capable of, but neither would he. Children with autism face a lot of barriers to their development and growth, and I don’t want my attitude to be another barrier for him in his learning.

This means I often challenge him, which sometimes ends in a stand-off situation, where Iwant him to do something independently, and he refuses. This weekend, it happened in the swimming pool changing rooms. I know Sonny can get dressed independently, I have seen him do it before, but today he didn’t want to. To be fair to him he was asking really nicely for help, so I helped him a little bit, but I didn’t want to do it for him because I knew that he could do it on his own. He did do it on his own, but it took literally 45 minutes.

Of course a balance needs to be made, I wouldn’t want to ask Sonny to do something on his own that he was incapable of doing, as it would reduce his confidence and could make him really frustrated.

Apart from the changing room saga, we had a lovely day, Sonny was doing LOADS of talking. He also was trying to shut me up a lot of the time!