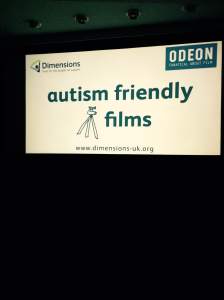 So this was a curve ball.

Sonny had never been to a cinema before, but I was feeling brave last Sunday so thought we would give it a whirl!

The Odeon were screening Shaun the Sheep on Sunday especially for those with autism. The lights aren’t fully down, the sound isn’t as loud, and there are no trailers before the film.

As soon as I opened the door to the screen we were in, he pulled me back out. I suddenly realised that I was trying to drag him into essentially what was just a massive dark room and he had literally no idea what was about to happen. As we were a bit early, the film hadn’t started. After a tug of war that lasted about 5 minutes I managed to get him into the room. We sat down at the front. There was a period of about 10 minutes that was fairly traumatic. He threw a water bottle, he was crying and kept saying ‘go home’ ‘it’s home time’. There was another child with autism with his parents in the back row, but other than that it was empty. I was trying to tell him we just needed to wait for a few more minutes but he really was NOT happy. It was so refreshing though to be somewhere that it didn’t matter if we were causing a scene. I mean we usually do cause a scene wherever we are, but I didn’t feel remotely weird about it, as the only other people present knew what was happening.

When the film came on I thought Sonny was going to jump out of his skin. Instantly the tears stopped and he had a huge smile on his face. It was the best hour and a half EVER. He was laughing and clapping and when one of the sheep was upset he signed ‘sad’ and said, ‘oh no’. He went right up to the screen at one point with his fingers in his ears and stared at it. He ran around a bit but mostly sat in his chair and LOVED IT.

This video isn’t very good quality but hopefully you get the idea!

I thought he might get frustrated that he didn’t have a remote so he couldn’t rewind certain parts (this is what he does at home) but he didn’t at all. It was absolutely fab. 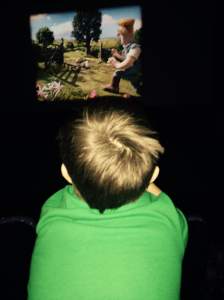 Occasionally the other child would shout a random word, and when Sonny was making noises and flapping his hands on the chair in front, myself and the mother looked at each other and smiled. There was no judgement or embarrassment or awkwardness.

It was so refreshing to be in a public space with Sonny and feel that he is utterly free to be himself, instead of having to conform in some way: to be stared at when he is flapping his hands or making noises or climbing all over me or lying on the floor. 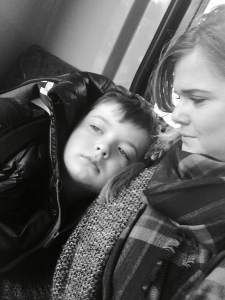